I’m writing this post from 30,000 feet, or about twice the summit of Mt. Rainier, which checks in at 14,411 ft. Carl Kapes (seat 25C) and I (seat 26C) are on American Airlines flight 729 from Philadelphia to Seattle, Washington. We’re supposed to land around 7:15, Pacific time, and we’ll be staying in Seattle tonight.

We hope to grab a late dinner with Tim (according to his email signature, he is: Timothy J. Miller, Ph.D President & CEO, Abeona Therapeutics Entrepreneur, Adventurer, SuperDad). I think if I memorize all of that, he might buy dinner.

Why are we flying to Seattle? It’s the #RallyOnRainier and Carl, Lauren Harris, Tim and I plan to climb to the summit of Mt. Rainier this weekend. All of the pertinent info you need is available on prestonandsteve.com. I hope you’ll read some of that and check out some of the videos. This adventure is first and foremost an effort to help some sick children. Carl is the father of two sons who have Sanfilippo Syndrome, a terrible and quite rare disease that is fatal in kids. This climb was organized to benefit Team Sanfilippo and if you’re interested in donating directly to that wonderful organization, please check out their YouCaring.com page.

Here, Carl and I wait patiently for our flight to start boarding in Philly:

The first (and most dangerous) step of our journey: the Philly airport. Carl and I are ready for the flight to beautiful Seattle, WA! 👍🏻✈️🛫 #RallyOnRainier

Tomorrow, we get up and get organized, meet up with Lauren, get our gear together and head from Seattle to the mountain. I’m excited for a number of reasons, but of course, I’m also nervous. I feel prepared and THINK that I have all of the gear that I need, except for what I’ll be renting, which includes alpine boots, crampons and an ice ax. It actually might be kinda cool to OWN an ice ax, but I’m pretty sure I don’t need one on a daily basis.

Anyway, the climb itself is a bit daunting. It’s a long slow way up from about 5,000 feet to more than 14,000. We are supposed to start the climb in earnest Saturday morning and work our way up to Camp Muir, which is at about 10,000 feet. We’ll spend Saturday night there, then get up VERY early Sunday morning and attempt the summit. We then return to Camp Muir for a second night, before descending the rest of the way on Monday.

Four years ago, Carl and I climbed Mt. Kilimanjaro in Tanzania, Africa and that peak is 19,341 feet. Our BASE CAMP was at about 15,000 feet, higher than Rainier’s peak. That climb took six days: four up and two down. On the surface, one might think that a climb up Rainier might be a little easier than Kilimanjaro, but that’s not quite the case for a two main reasons:
First, we’re climbing a month later in the year and at a much higher latitude. Kilimanjaro is at 3 degrees south and is quite close to the Equator. Rainier, on the other hand, is at 46 degrees north and we’re approaching the end of summer and hence, the end of climbing season. Therefore, weather can be, and often is, a factor.
Second, there are a lot more technical aspects to the climb and when it comes to those, I’m a total novice. Save for a few mountain glaciers over the years, I’ve never really hiked in snow and ice. I’ve never attempted to cross a crevasse on a ladder: 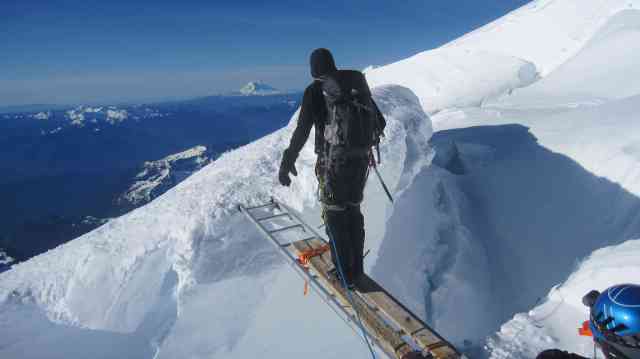 A photo from SummitPost.org

Regardless, we are hiking with the experienced guides from RMI Expeditions (Rainier Mountaineering, Inc.) and they’ll teach us how to use ropes, the ice ax, and yes, even the crampons. Giggle.

Any anxious feelings I’m experiencing are definitely tempered by my excitement. I LOVE our National Parks and feel quite lucky that I get to go back to Mt. Rainier National Park. I visited with my dad and brothers back in 1993 and then again as a camp counselor in the summer of 1997. The park is beautiful and serene and I can’t wait to see it again.

I’ve spoken with a few people over the last few days who have climbed Mt. Rainier and they’ve all given me two pieces of advice to which I expect to adhere: take your time and enjoy the views.

I will try to post photos and videos when I can and I hope you enjoy what I have to write. Thanks!